Although mitigation measures will slow the rate of a changing climate, they will not reverse the impact thus far or prevent its continued growth over time – which makes adaptation measures that much more imperative.

A new report from RE/MAX Canada analyzes how the Canada real estate market might respond to climate change-related scenarios between 2022 and 2027, such as floods, wildfire and severe storm events. According to the Insurance Bureau of Canada, the estimated trend of the overall costs of catastrophic losses has increased from approximately $1 billion in 2005 to almost $2.5 billion in 2021.

“These climatic stresses are increasingly colliding with federal and provincial government housing policies, which aim to significantly increase the country’s housing supply to rectify the chronic lack of inventory. Yet, the need to restore and retain green infrastructure, such as wetlands, and the immediate need to upgrade our hard infrastructure, particularly sewage systems, coupled with a decline in developable areas due to extreme weather could make these goals difficult to achieve unless these factors are all integrated as one program,” says Christopher Alexander, President at RE/MAX Canada. “In the meantime, giving guidance to homeowners on how to take advantage of programs that already exist, such as the Climate Adaptation Home Rating program, in combination with things such as energy assessment, is important to share throughout the home-buying journey.”

A recent survey conducted by Leger on behalf of RE/MAX Canada found that 61 per cent of respondents believe Canadian real estate is the best long-term investment they can make. They do not see this changing over the next five years. However, when looking ahead to their future in 2027, 57 per cent of Canadians say that a key factor that will impact their housing location is climate change and the potential of weather-related events.

According to Dr. Mike Moffatt, Senior Director of Policy and Innovation at Smart Prosperity Institute, governments need to advance bold and immediate investment and intervention in mitigating losses from extreme weather events. “The immediate need to allocate a minimum of $5.3 billion a year to the restoration and modernization of Canada’s green infrastructure, such as wetlands, grasslands and brown infrastructure, including sewage systems, among other initiatives, must become a priority for all levels of government.”

As Moffatt notes, while Canada’s three levels of government don’t always “play nice in the sandbox” together, or for act in concert expeditiously, some voters with homes, mortgages and rents could increasingly demand robust action. According to RatesDotCa, home insurance premiums rose 140 per cent in Alberta since 2011 and jumped 64 per cent in Ontario. 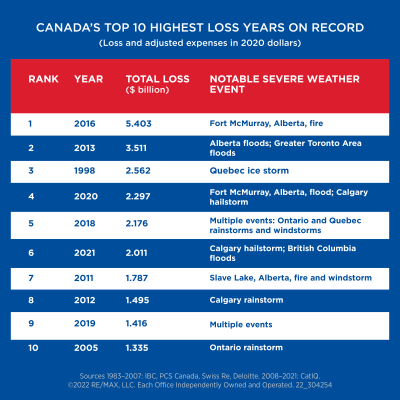 The immediate financial risk climate change is having on real estate in Canada is widely visible today, as six per cent—and up to 10 per cent—of homes across Canada are already uninsurable for flood risk. Moreover, as we continue to build on floodplains that number will grow according to Kathryn Bakos, Director of Climate Finance and Science at the Intact Centre on Climate Adaptation.

So, where to allocate and invest $5.3 billion per year, over the next five years, to help better protect current and future homeowners?

Bakos suggests the need to fix and modernize Canada’s aging and depleting hard (or “grey” and “brown”) infrastructure, and prioritize investing in retaining, restoring and rebuilding natural (or “green”) infrastructure. “We have been depleting and destroying our natural infrastructure for decades in the interest of urban development and we must now reverse and correct that damage to ironically protect much of what we’ve built,” she noted.

Bakos, a climate adaptation researcher and Moffatt, a climate mitigation specialist, both advocate for focused governmental and private-sector investment in the retention and restoration of natural infrastructure such as wetlands, grasslands, forested areas, coastal marshes, dunes, etc. These natural systems are critical defences in a wide variety of extreme weather events, such as powerful rainstorms, and help protect residents and property situated within the respective ecosystems.

The average cost of repairing a home damaged by flooding runs at approximately $40,000. This makes preventing the damage in the first place imperative to lowering risk, through measures such as retaining, restoring and rebuilding natural infrastructure and maintaining and modernizing built infrastructure. 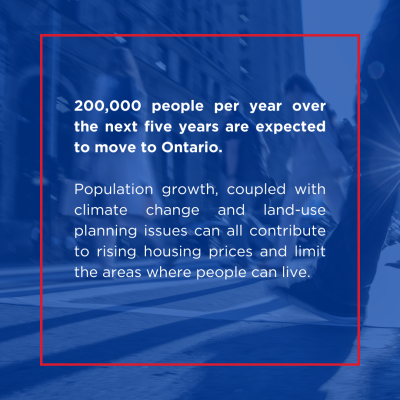 Additionally, according to both Bakos and Moffatt, it’s all connected. As extreme weather events impact more communities across Canada and costs continue to rise, the probability that liveability is impacted will increase. Specifically, if residents are being pushed out of certain neighbourhoods because the costs to fix their homes due to extreme weather risk damage has or will become restrictive. All of which could be amplified further through rising immigration levels and increasing demand.

According to Bakos, in parallel with the retention and rejuvenation of natural infrastructure such as wetlands and grasslands, governments at all levels need to invest in building and upgrading more comprehensive sewage run-off such as, sewer separation projects – the practice of separating combined pipe systems into separate sewers for sanitary and storm water flows – all the while distributing home flood protection information to homeowners to guide them on how to lower the risk of basement flooding. In coastal areas, particularly British Columbia, the Canadian Climate Institute says it is important to reinforcing dike infrastructure, with 96 per cent of dikes in the area having been assessed as too low. Although it is important to maintain these, it should not be the only measure taken. Managing vulnerable areas via land use planning and moving individuals out of high-risk areas is more effective in the long-term.

“Right now, approximately six per cent of Canada’s housing market is at risk of a 1-in-100-year flood event and has been classified as essentially uninsurable. That number will only increase as we continue to build homes in floodplains and if we don’t fix our diversified infrastructure,” says Bakos. “Even homes located outside the floodplains are still at risk of flooding. My rule of thumb is that if you live anywhere where it rains, you are at risk of flooding.”

According to the Leger survey, 25 per cent of Canadians worry that climate change will impact their home and/or neighbourhood and change their home-buying journey over the next five years.

While governments and society work toward meeting longer-term carbon reduction goals to meet international commitments, these strategic adaptation investments in natural and hard infrastructure must be put into place now, to protect people and property while also mitigating soaring home insurance premiums.

The Government of Canada has committed to developing Canada’s first National Adaptation Strategy in collaboration with provincial, territorial and municipal governments, Indigenous Peoples and other key partners, with a goal to unite decision-makers across Canada, “through shared priorities, cohesive action, and a whole-of-Canada approach to reducing climate change risks.”  However, according to Moffatt, investment needs to flow now and in tandem with any housing strategies to bring equilibrium to the demand and supply side of the market.

Moffatt even suggests that the federal government offer a “safety net” to homeowners who can no longer afford home insurance premiums, in order to protect them from a catastrophic loss—or in some cases, buy properties outright that fall within areas deemed too risky to live. Governments have already instigated
buy-back programs in chronic flood zones, such as in Gatineau Quebec.

“It’s been encouraging to see provincial leaders and the federal government prioritize housing to meet the needs of our growing population, all while keeping affordability front and centre, but the lack of clear integration with climate change adaptation and mitigation investments, including addressing mounting insurance stresses, is concerning,” says Alexander.

Unlocking the Future: The Climate Chapter is the second chapter of a five-year outlook on Canada real estate, developed by RE/MAX in collaboration with Kathryn Bakos, Director of Climate Finance and Science at the Intact Centre on Climate Adaptation; and Dr. Mike Moffatt, Senior Director of Policy and Innovation at Smart Prosperity Institute.

The first chapter, The Economic Chapter was developed in collaboration with CIBC and The Conference Board of Canada and examined how the the housing market in Canada might respond to economic scenarios between 2022 and 2027, specifically, interest rate hikes, annual immigration volumes and taxation.

The Climate Chapter examines how the country’s housing market might respond to climate change-related scenarios between 2022 and 2027, such as floods, and wildfire, as well as severe storm events.

The post Canada Real Estate: $5.3B Per Year to Mitigate Financial Risk from Climate Change appeared first on RE/MAX Canada.