The affordability factor continues to drive condominium buying activity in the Edmonton real estate market, with year-to-date sales (January-August 2022) up almost 23 per cent over 2021 levels, according to RE/MAX Canada’s 2022 Canadian Condominium Report. Nearly 5,000 condominium apartments and townhomes changed hands in the eight-month period, up from just over 4,000 during the same time in 2021 as buyers adjust their expectations due to higher mortgage rates. Despite the increase in sales, values in the city remain relatively flat, sitting at just over $234,000.

Almost 85 per cent of the 26 Edmonton MLS neighbourhoods examined are reporting year-to-date percentage increases in unit sales, with Lymburn (+112 per cent), Tawa (+82 per cent), Larkspur (+80 per cent), Rutherford (+66 per cent) and Walker (+66 per cent) leading the way with double-digit gains, compared to the same period in 2021. Meanwhile, demand has waned year-over-year in Edmonton’s core, where the highest concentration of apartment condominiums can be found, with condominium sales down three per in Oliver and 13 per cent in Downtown.

In recent years, the city has moved to revitalize the downtown area through its ICE District – a mixed-use community surrounding the Rogers Centre that includes residential, retail and commercial development. The city has also invested in festivals, concerts and movie nights in the Art District’s Churchill Square, and has created pet-friendly parks and community gardens that attract both local residents and tourists. With employees set to return to downtown offices in hybrid work schedules, the current lull in the Edmonton real estate market presents opportunity for those seeking affordable home ownership.

Bachelor and one-bedroom condominium apartments in the core have fallen below the $250,000 price point at a time when rental rates are rising. Townhomes continue to be a popular choice, with many buyers willing to travel farther afield for newer product. The year-to-date average price of a townhome has risen almost five per cent in 2022, climbing from $231,470 in 2021 to $243,038. While some higher-priced townhomes continue to linger from the heated spring market, buyers are starting to tweak their pricing to reflect current market realities. Seventeen of the 26 MLS markets analyzed posted a year-to-date increase in average price, ranging from one per cent in Terra Losa ($216,286, vs. $215,012 in 2021) to as high as 20 per cent in Larkspur ($225,236, vs. $188,112 in 2021). Given that the province of Alberta is expected to lead the country in terms of economic growth this year and next, both condominium sales and average price in the Edmonton real estate market are likely to remain stable for the foreseeable future.

Condominium market share has grown in major urban Canadian real estate markets yet again this year, a reflection of new market realities and the shifting course of entry-level buyers. RE/MAX Canada’s 2022 Canadian Condominium Report examined more than 120 communities in six major markets, including Greater Vancouver/Fraser Valley, Calgary, Edmonton, Greater Toronto, Ottawa and Nova Scotia. The report found that condominium sales were down in the first eight months of 2022 in four markets, including Greater Vancouver/Fraser Valley, Greater Toronto, Ottawa and Nova Scotia, while Calgary and Edmonton reported double-digit sales increases over the same period in 2021. Condo values are up in almost all markets year-over-year, with many bolstered by a robust strong first quarter.

Condominium market share, as a proportion of total Canadian real estate sales, advanced across the board, with upswings reported in five out of six markets analyzed, ranging from a low of 0.08 per cent in Ottawa to a high of 6.6 per cent in the Fraser Valley. Compared to year-to-date levels one year ago, condominiums now represent just over 54 per cent of total residential sales in Greater Vancouver, 36.3 per cent of residential sales in the Greater Toronto Area, almost 32 per cent of sales in the Fraser Valley, just over one in four sales in Edmonton and Ottawa, and almost one in five sales in Calgary. Nova Scotia was the only market to register a decline in condominium market share. 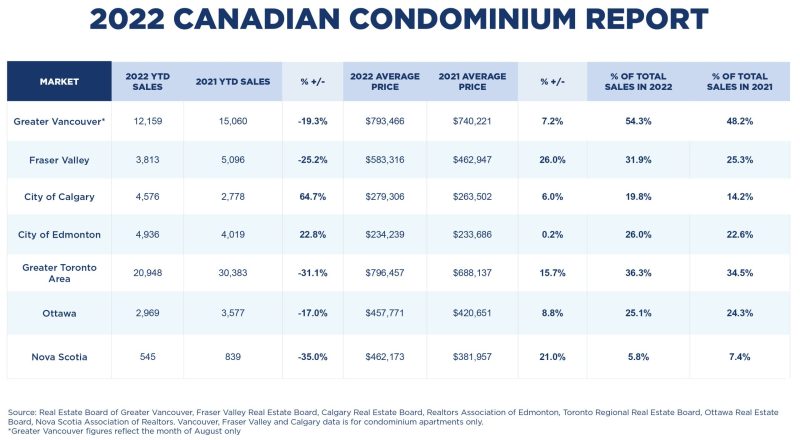 “The affordability factor is the key issue in today’s housing market,” says Christopher Alexander, President, RE/MAX Canada. “Rising interest rates have slowly eroded purchasing power and, despite lower housing values and cooling market conditions, buying a house is more challenging now than ever before. For those who have adjusted expectations with every rate hike, the cost of carrying a mortgage versus renting is now more comparable, given sharp double-digit increases in rental rates throughout the major markets, but especially in BC and Ontario. So, while fewer sales have occurred in 2022, condominiums represented a greater proportion of overall sales, as buyers gravitated to affordable options to achieve home ownership.”